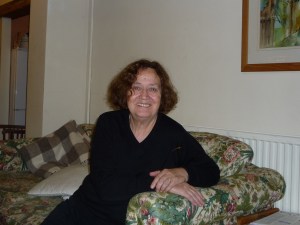 I have been writing stories and poems for many years and have always been an avid film goer, my preference being for stories based on factual accounts of victims of social injustice in one form or another. As  an active member of campaigning organisations such as Campaign for Nuclear Disarmament, I was involved in the peace movement. Later my focus turned to poverty and politics. I am at present a member of the Caerleon Labour Party.

I taught English, Drama and Religious Education in Roman Catholic comprehensive schools where I became familiar with the documents of the Church’s social teaching.

In the 1980s I gave up teaching and trained as a Wefare Rights Worker, working for the Unemployed Workers Centre in Bristol. This unit was closed down at the expressed wishes of the, then prime minister; we had published a newsletter advising homeless, unemployed how to claim the benefits to which they were legally entitled!

This was followed by a further year in a similar unit run by the local authority where I supported claimants in their appeals and developed other advice centres in the rural and seaside areas around Bristol. One of them, the Welfare Rights Enquiry Network (W.R.E.N.), still exists in Weston-Super-Mare. Once again I lost my job when the political colour of the local authority changed.  I was then transferred to a local Social Work Team as a social work assistant working with the elderly. It was made very clear that I was not employed to give welfare rights advice!!

Retirement, widowhood and an empty nest gave me the opportunity to travel. I visited Japan, India, and the United States. I taught English as a foreign language both in the UK and abroad.   On my return I became involved in the peace movement again and taught preaching on the Dominican Peace Preaching Course. I went with them on a Peace Pilgrimage around Europe meeting other campaigners and visiting Dachau concentration camp where I spoke to some of the survivors.

I served for a number of years on a Diocesan Justice and Peace Commission (including three years as chair) and as part of the Newport Justice and Peace Group: supporting asylum seekers, working in the kitchen of a night shelter, and taking Holy Communion to the sick in hospital.

But all the work, talk, writing, and campaigning didn’t appear to have made any difference. I concluded that the pen and the tongue may be mightier than the sword but they only have real power when made into visual images.  Ten years ago, I returned to my theatrical roots and began to write at first for the theatre and then for the screen.

Below is an overview of my work so far.   I need to find a producer and raise the funding to get a film made:

Lies……. Feature length screenplay. Based on a true story.

A working class, uneducated woman takes on three governments to get to the truth.of her brother’s death.  Pitched at London Screenwriters Festival 2012. Treatment requested by Ned Dowd, Peachy Films.

The script was developed with Stephen May, The Screen Arts Institute 2013-2014.

In March 2014 this screenplay was pitched to Kimberley Warner, Development Executive and Hannah Thomas, Head of Creative Sector Development of Ffilm Cymru, the Film Agency for Wales.

It excited interest but the budget was too big for the funds available.  Kimberley suggested that if it was made into a documentary, they would consider funding. The feature could then be made on the back of the documentary.

I  signed up to a documentary foundation course with Raindance, wrote and submitted a treatment…….but no funding….

Fran’s War……Feature length screenplay. An adaptation of the novel by Sally Trench.

Teenager Fran searches for her father in the besieged Sarajevo of the mid nineties.

Didn’t Ask To be Born ……. Feature length screenplay originally written as a Stage play and submitted to Soho Theatre.

A young man who was a designer baby searches for an identity.

2007   Mates  Short screenplay. The neighbours on the second floor of a block of flats discover the meaning of being a community…with the help of a friendly cat.

2008  Bodywork   Feature screenplay. A widow in her fifties relives her youth and almost dies.

2006: Hats   A professionally produced play performed at the Riverfront Newport with Lynn Hunter (BBC’s Baker Boys) in the lead as Mair.

2009  Cheryl in The Catharsis and the Bench Maker. A graduation film   written and directed by Jamie Maule-ffinch.

Voiceover:  Dorothy Dennistoun/Almina in The Life and Secrets of Almina Caernarvon (in production) Written by Will Cross. Directed by Tom Dart, Old Man Productions Newport,

2001 Mother in Voyage Round My Father by John Mortimer with Bristol Theatre Exchange performed in Bristol and Hannover Germany. Director: Hugh Gregor.

.2002 Lady Bracknell in The Importance of Being Earnest by Oscar Wilde with Newport Playgoers. Director; Carol Canterbury.

(Marriage and family while pursuing a career in theatre and education)

2007  Screenwriting module from the BA course in film at University of Wales, Caerleon, Newport..